On June 10, 2017, I attended Ancestralizing the Present, a free event hosted by Dr. Mique’l Dangeli at The Dance Centre with performances by Spakwus Slulem (Eagle Song Dancers), Git Hayetsk (People of the Copper Shield) and Aeriosa. The event is the extension of Dangeli’s doctoral thesis “Dancing Sovereignty: Protocol and Politics in Northwest Coast First Nations Dance.”

In advance of the day, Dangeli, the event’s curator and Dance Centre artist-in-residence, published a blog post, which outlined “fundamental aspects necessary in generating a more complex understanding of Northwest Coast First Nations Dance.” The intention of the post, Dangeli emphasized, is not “to teach non-First Nations people, as a part of so-called ‘Reconciliation,’” but instead “ to provide us with the support (space and funding) to strengthen our own practices and recover what we have lost during our cultural genocide.”

The day opened with The Dance Centre front of house manager reciting the territorial acknowledgement, which prior to her residency, Dangeli tells us they did not perform. In fact, the acknowledgment began with the words, “The Dance Centre has changed a lot over the past two years.” Later, after Dangeli introduces herself in Tsimshian and English, she divulges that this intro was written by her at the beginning of her residency.

For Dangeli it was important to recognize that Northwest Coast First Nations dance practices have been “dismissed by academics, and by the greater dance community” as being inflexible and bound by tradition. She explains that these views are stereotypes that non-Indigenous people impose upon Indigenous artists, and that, in actuality, Northwest Coast First Nations artists are continually producing new contemporary work.

The first performers were Sḵwx̱wú7mesh (Squamish) dance group Spakwus Slulum, led by S7aplek (Bob Baker), who introduced his family, acknowledged his ancestors and welcomed us to their territory. Spakwus Slulum were joined by dancers from contemporary aerial dance company Aeriosa to perform an excerpt of their collaboration Trees are Portals. After the show, the audience was invited to join both dance groups on stage to learn and perform the “Gathering of Eagles,” an invigorating experience that Dangeli describes as “giving a sense of what it takes to perform these dances.”

In the talk-back afterwards, Dangeli tells us that an entire chapter of her PhD dissertation is dedicated to this unique collaboration. The project, which involved “taking the time to get to know one another,” is one she believes to be closer to “reconciliation” than projects that simply tick the boxes of inclusivity, or demand that Indigenous artists perform settlers’ expectations of Indigenous culture.

Aeriosa’s Artistic Director, Julia Taffe, relates that when she wanted to perform traditional songs that S7aplek had shared with her, she discovered that “the songs already have their purpose and meaning.” She concluded, “we had to do something new.”

The notion of the “contemporary” is addressed again when Dangeli broke down the term “ancestralize”, which was coined by dance artist and scholar Erin Manning to describe “the ways in which Indigenous artists draw upon ancient ways of being, knowing and relationships to territories to create work that activates the present so that it becomes the future.” Dangeli tells us that she is broadening the word’s meaning to include the embodiment of Northwest Coast First Nations culture, reiterating that Indigenous dance artists are actively “ancestralizing the present” and that First Nations cultures and protocols are “more complex than most people realize.” She emphasizes that this complexity must inform collaborations between Indigenous and non-Indigenous dance artists.

This brings me back to earlier in the program, to when Git Hayetsk (the dance group Dangeli leads with her husband Mike Dangeli) sent feathers flying through the space, signifying the lightness with which we must tread as guests on others’ lands and when approaching others’ traditions, cultures and protocols. 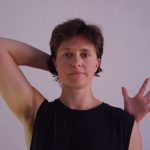 By Deanna Peters
Read more by this author