This article was originally published in the Spring 2021 edition of the Current Society newsletter.

For the first time in the prize’s 40-year history, the 2020 Nathan Cohen Award for Outstanding Review honoured a piece of dance criticism, marking a change from its historical focus on theatre.

Deirdre Kelly took home the award, presented by the Canadian Theatre Critics Association, in December 2020 for her Critics At Large review “Danse Macabre: Three Works by the National Ballet of Canada,” written in March 2020.

“This isn’t just my win,” Kelly said in an interview with The Dance Current, addressing the dance community in Canada. “This is your win.”

Published at the outset of the COVID-19 pandemic in Canada, “Danse Macabre” is a meditation on the delicacy and resilience of the human form at the precipice of a massive health crisis. Jose Solís, the 2020 guest judge and Honduran-American theatre critic, called Kelly’s piece “the perfect review for 2020” in his comments in the Canadian Theatre Critics Association’s e-bulletin, “the kind where our own humanity can’t help but burst from the page.”

Kelly, who began writing about dance in journals as a teen and worked for years as a dance critic for daily media, has been writing for Critics At Large since 2011. Now, she said, most of her dance criticism is passion-driven and often unpaid. The win strikes a very personal chord for Kelly, validating years of hard and often unpaid work.

“I feel that I’ve left a legacy,” Kelly said. 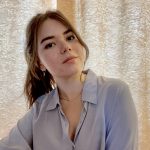