Forty-odd dance renegades are in the park. They are partnered up and armed with a boom box. Coming from all over North America, they have converged on Toronto, united by the love of a relatively new and obscure dance.

The dancers are here over the Civic Holiday weekend in August for the North American Zouk Exchange. So far there has been an inaugural party, a full day of workshops and an informal discussion about the history of zouk. Every night the social dancing goes on until 7:30 a.m. Nobody appears to need anything other than zouk, including sleep, because by mid-afternoon, they’re at it again.

This is a dance congress with a serious competition, and trainers that have come from Amsterdam, Montréal and New York, yet very few things have gone according to plan. However, the nature of the community is such that organizational screw-ups are promptly forgiven as participants are eager to just fix things and get on with the dancing.

This kind of intimacy and informality are characteristic of the dance itself. Its movements are fluid and sensual, cool like an overcast summer day. There are lyrical torso movements and hair tosses. The tempo is slow and the footwork simple. Brazilian zouk (not to be confused with French-Caribbean zouk, which is a distinct dance and a genre of music) emerged from lambada in the mid-nineties. In just twenty years, the dance form has found its way all over the partnered dance world, and continues to spread. Most zouk dancers have backgrounds in other partnered dances, but once converted, many swear by it.

In 1989, lambada gained worldwide popularity, thanks to French-Brazilian pop group Kaoma’s hit single, Lambada. Kaoma was put together by a pair of European entrepreneurs who recognized lambada’s appeal immediately after encountering it on the beaches of Porto Seguro, a tropical paradise in northern Brazil. Kaoma’s videos were inspired by what they saw: fishermen dancing on the beaches with women wearing loose skirts that would fan out in revealing ways when they spun. Lambada exploded on the world music scene: the song was the top-selling single in Europe that year, topped the charts in eleven countries and sold five million copies worldwide. The subsequent lambada dance craze inspired three movies within a year.

Despite the initial craze, lambada music was all but extinct by 1995. Zouk was born as lambada dance adapted to different genres of music. Porto Seguro’s geographical proximity to the Caribbean meant it already had exposure to French-Caribbean zouk music — which is where the new dance got its name. The Porto Seguro dancers and their contemporaries in São Paulo started dancing lambada, but to this slower Caribbean music. This was the origin of what is now known as lambazouk, a style of Brazilian zouk that is closer to its lambada roots.

As opposed to northern Brazil, in Rio de Janeiro, lambada was largely associated with the African-Brazilian community and relegated to the underground. Its one harbour was a club named “Ilha dos Pescadores” (literally, Fishermen’s Isle). One couple, Adilio Porto and Renata Peçanha, are credited with inventing Rio-style zouk, (a.k.a. traditional Brazilian zouk). In the absence of lambada music, Porto adapted a new basic step from samba that would be easy to teach. Unlike the Porto Seguro dancers, Porto and Peçanha had a more traditional dance background in many dance forms, including ballroom, tango, ballet, samba de gafieira, bolero and jazz, and Peçanha incorporated movements from these other dance forms. This made for an extremely adaptable style and allowed them to interpret the music differently, following the melody as much as the rhythm. Zouk is danced to an incredible variety of music, from pop and hip hop to Bollywood. The rhythm often falls away and the dance continues, following just the melody. Adaptability is the main reason why it is so attractive to dancers from other partner forms.

Hisako Izutsu, a dancer and zouk instructor at Lambazouk in New York City, was converted to the form in 1999, while studying tango in Argentina. At that time, Brazilian zouk was still somewhat ill-defined, and when she asked her peers what it was, they responded simply, “lambada.” Growing up in Japan in the 1990s, Izutsu had encountered lambada through Kaoma’s videos, and found it quite scandalous. “Ew, what is this, they are so close!” she remembers thinking. But eventually, she admits, “I fell in love with the out-flowing energy.” For Izutsu, the energy in tango was deep but insular, whereas in zouk there was always a projection outward through movement. Zouk makes use of the whole body, not just in solo parts but also in partner work. Movement can be led through the hips, the torso or the arms.

“We can put our backgrounds into zouk,” says Charlotte Mathiessen, who is visiting Toronto for the Zouk Exchange from Amsterdam with her partner Gert Faber. For them, “Salsa is very structured, you cannot add anything to it. Zouk is a little more open.” Faber brings to his zouk practice an extensive background in jazz and Wushu (a kind of Chinese martial art) training. He uses fully extended arms in an open second position to lead elaborate, lyrical movements of the head and upper body. Faber has learned directly from Porto, but this particular technique is his own innovation.

“Zouk is a very integrated dance,” says Junyan Boon, co-organizer of the Zouk Exchange and instructor at the Toronto zouk school, Mazouka. “For people who like that expressiveness, and like to dance with popular music, zouk is a godsend.”

The dance in the park was just a warm-up for the most anticipated event of any dance congress: the competition. A few steps up Kensington Avenue at The Round Venue, competitors are not being rated by judges or even an audience, but by each other. Each leader dances with all the followers, and then rates them. The followers do the same with the leaders. The highest scorers on each side win. The idea is to judge dancers by their ability to improvise and connect with their partners, arguably the most important elements of social dancing.

Co-organizer Danielle Nash says they invited low-profile instructors to give attendees and aspirants more access to the teachers. At other congresses, says Nash, “Some of the attendees come away feeling like they came there just to pay for the stars to get together and party with each other.” As a student of zouk for a mere three months, I was pleasantly surprised when instructors actually asked me to dance and that they were willing to dance if asked. This is nice because it gets at the essence of social dance — interaction on the dance floor irrespective of rank or ability.

The mission of Zouk Exchange, according to Boon and Nash, was to connect disparate zouk communities from across North America. There were approximately 150 attendees, with about a third of them from outside Toronto. But, Boon is ambivalent about whether they’ve been successful in that mission.

The community in Toronto did not rally behind the event. While there are at least four zouk schools in Toronto, only one of them (Mazouka) was represented at the Zouk Exhange. “We’ve actually been boycotted by all the other schools,” says Boon. The last of them, dZouk, boycotted Mazouka this April soon after Mazouka asked dZouk instructors not to come to their socials. Boon finds it difficult to work with the other organizations because he feels they don’t run as professional schools, often treating the dance as more of a hobby.

Mazouka has announced that this will be the last Zouk Exchange. “We want to spend more time with our students,” says Boon. He is considering having smaller, more frequent visits and workshops by instructors and dancers from abroad. The intention is to spend more time teaching.

Zouk teachers often lament the divisions between styles and personalities, suggesting that these conflicts are bad for the dance community. However, the fault lines are also indicative of the nature of the dance. A diverse form, open to individuality, zouk attracts all kinds of participants. Like any sector, there may well be schools that are unable to work with each other, which is fine as long as they aren’t actually working against each other. This doesn’t necessarily have negative consequences for the scene as long as students are able to attend socials wherever they please. However, to develop the form, dancers must be able to interact with good dancers from diverse backgrounds in addition to attending classes. Zouk’s diversity, and the passion of its dancers, makes it a perfect dance for this and the short-lived Zouk Exchange was a beautiful way to facilitate it. Too bad it’s now relegated to history. 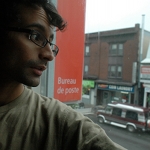 By Naushad Ali Husein
Read more by this author