Preperation
PACKING. Oh, packing. This is always a daunting task for procrastinators. And more daunting if your company is a on a multi-city, multi-country tour. North, south, wind, rain, snow. Living out of a suitcase is not easy. And I am not a bare minimum kind of guy.

I start by taking out everything I want to bring, then narrow that down to what I actually need. Then it gets emotional because I love both sweaters and if I leave one, the other one will never look at me the same again. So I stuff in the emotional dilemmas.

Leaving home for a month is just as difficult as deciding which articles of clothing to bring. Do I leave my windows open a crack? What if it rains? Organizing a friend to come and pick up my mail and water my plants. Paying rent three weeks in advance. Not having my own bed. Can I bring my bed? My daily comforts I take for granted now become sacred artifacts. If I could tour out of my apartment, I would. Just like the scene from Pixar’s Up, when the old man’s house flies away with the power of thousands of helium balloons.

Besides all of the pre-travelling stress, I really do love tour life. I am very lucky to have a job I love that takes me around the globe.

Airport
Travelling in a group allows for certain liberties. For starters, skipping the check-in line to check in as a group. It’s a luxury but actually quickly becomes more complicated because of our twenty-five personal suitcases and ten extra company suitcases. (And my floating apartment outside of the departures terminal …) We also have the ability to occupy an entire section of the gate for stretching, picnicking, meditating, tag, company meetings — you name it, we do it.

Legs up in the plane, of course. No shame, because I’m not alone. I look around the aircraft and spot my colleagues’ feet popping up sporadically — permission in numbers. This usually causes conversation to strike up with other passengers about our dance company and sometimes leads to more complex conversations about their life and their connection to dance. It’s a beautiful thing.

The aircrew usually finds out who we are, the Compangnie Marie Chouinard crew. More often than not, I get asked to perform for them in exchange for extra cookies mid-flight.

We arrived in Lyon, France, off a red-eye flight and boarded a private bus to Avignon.

We’d toured to Avignon earlier this year, in January, and performed in the city’s Opera house. This visit, we had the privilege of performing outdoors on one of the many scenic stages the Festival d’Avignon had built.

One stage was in the main courtyard of Palais des Papes, the home of many popes in the beginning of the 1300s before they moved back to Rome later that century. Another stage was in a small courtyard where vines took over the walls and a giant fig tree acted as a canopy for shade.

The stage we performed on was in Cour du Lycée St. Joseph, a courtyard with four giant stonewalls and large glass windows that line the perimeter. The sight of the space took my breath away when I first walked in.

I wasn’t a big fan of Avignon in January. I felt a lack of diversity in race, sexual orientation and progressive culture. I was shocked returning this time around; the city had taken a 180-degree turn. Festival D’Avignon is a beast! It hosts over 200 shows in more than fifty venues and attracts people from all over the world. I was having coffee and started talking to a handful of Australians who were there at the festival to support “their mates from Cali.” The streets were filled with busk performers, opera singers, musicians, mimes, etc. Two brothers had constructed a giant, metal, post-apocalyptic-looking bike with bras as decoration and a drum kit on the back. Their music created a party wherever they went.

The city felt like a bubble, disconnected from the rest of the world and yet buzzing with energy of the now.

We performed Marie’s 2015 piece Soft virtuosity, still humid, on the edge. It is a complicated work that is packed with live projections from four different cameras. It features a most stimulating score by Louis Dufort and is physically shocking, which usually leaves the public with questions and strong opinions. This breeds great discussions in the post-show lobby. And that’s why I love this work, why I love Marie’s work. It opens up some part of the audience that perhaps they haven’t visited yet. A part of themselves, or their relationship to the world that requires a conversation. This is the purpose of art, to feel and connect.

I remember how it felt to be onstage in Avignon — feeling the brisk wind on my body and the warm stage lights on my face. It was heavenly.

This was a special stop for me. I fell in love with Spain. The warmth of the sun, the taste bud-teasing food, the energy of the people, the wide range of nightlife. This city is alive 24/7 — watch out NYC!

In Madrid we pre-premiered Marie’s newest work, Hieronymus Bosch: The Garden of Earthly Delights, inspired by Hieronymus Bosch’s painting. As luck would have it, The Museo Nacional del Prado had an exhibit of Bosch’s work that included the painting itself! A few strings were pulled and the company was invited to the museum for a private viewing before the space opened to the public. During the creation process in Montréal, we had a blown-up version of the painting in the studio so we were familiar with the many of its fantastical details. Nothing beats the real thing, though. Nothing. It was a gift.

Makeup. Yes. For The Garden of Earthly Delights the makeup situation is … a situation. The design is quite simple but transformative. Three words: white, body and paint. Easier said than done. To pull it off, we create a schedule in pairs with thirty-minute slots to transform one another into Bosch characters. This preparation is a show in and of itself. I always joke that the public should be able to buy a backstage ticket to see how we prepare and even how we function during a show — it’s wild. There is as much movement and choreography backstage with props and quick-changes as there is onstage.

In Den Bosch, we had no shower stalls, which are usually used to not only clean up after but it’s where the paint spray gun is deployed. Let the problem solving commence. Luckily, our stage manager is full of creative solutions. He created, with spare black fabric, stage lamps and tarps, a fort-like structure that hosted our body paint shenanigans. And the public had no idea.

We arrived in Vienna in the early afternoon. As artists of ImPulsTanz, we were provided with free bikes to use during our stay. It was a fantastic way to see the city and its many attractions. A highlight was seeing a large portion of Egon Scheile’s work. I am fascinated by a body of work that can stand the test of time and Scheile’s work is still stimulating today. I wonder if it has something to do with discovery. In dance, at this time, we keep hearing that everything has been done — your ideas aren’t original. Does the same apply to visual art as well? Was Scheile the first to abstractly paint himself naked or have a fascination with prostitutes and put them in his work? It’s hard to believe but perhaps this is what has made his work last.

I have to be honest and say that the festival was a letdown. The hype of its reputation did not meet my expectations. Perhaps I am at fault for having expectations, but I did not feel the neighbourly vibe that I had heard about. I did not get to meet many other artists showing their work, which could be because we were so busy with our own shit, but I did not feel like my limbs would fall off with inspiration. Just a bit underwhelmed.

The end of the tour seemed like a dream. Bassano del Grappa is one of Italy’s oldest cities and is famous for its, surprise, grappa — an after-dinner spirit. Bassano is a city surrounded by rolling hills and mountains and a river named the Brenta, which slices the city in two.

Unravelling usually happens in the last city of the tour. Everyone seems to shed their old skin as the promise of their own beds is on the horizon. Grappa tasting was followed by cold dips in the Brenta’s fast-moving waters. I always feel a passion for the now when I visit Italy — the people seem to be more present and enjoying life.

The company performed outdoors here again, ending the tour like it began. Staggered brick walls enclosed us as we danced under the full moon; the wind, caressing our faces in moments of stillness onstage. It felt like a dream.

I remember the sun setting on the stage as we warmed up. This was the final tour for one of our colleagues. We surprised her with a goodbye basket filled with gifts and cards and memories of her time with Compagnie Marie Chouinard. Tears were shed. We dedicate so much of ourselves to our career and to our art form. We give every moment our whole. We live the work we do. When it’s time to move on, we see this commitment coming to an end. A new chapter must begin. It’s an emotional bridge.

After the show we cracked open one last bottle of grappa backstage to celebrate our month-long tour, still in full-white body paint. Like ghosts, we left a bit of us in this magical place.

McCabe has been a company dancer with Marie Chouinard since 2015. He’ll dance in the Canadian premiere of Chouinard’s Hieronymus Bosch: The Garden of Earthly Delights on November 1, 2016, at the Grand Théâtre de Québec in Québec City. 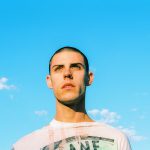 By Scott McCabe
Read more by this author