Editor’s Note: From February 4th through 7th, 2009, Bluemouth Inc. presented their participatory dance experience Dance Marathon at the Enwave Theatre in Toronto. The concept of participatory or interactive art has been rising in dance performance of late. Toronto-based dancer Cara Spooner was an “insider” participant in the Bluemouth event and here recounts her experience.

Rule #1: Your feet must keep moving at all times

Look down at the number printed on the pinny. Pretend to be surprised. Silently repeat “#32 #32 #32”. The crowd looks to match the numbers in foot shapes taped on the floor with the number they’ve been given. I look to match the audience, pretending that I’m searching for my own. I know exactly which corner I’m headed for (right side of the bandstand, next the jumbo-tron screen directly under one of the pre-positioned pools of light) but each night I always turn left to do a full loop of the floor before “finding” my spot.

The Bluemouth Inc. members and other planted dancers are doing the same. Unassuming, we attempt to blend in. Audience members flinch when separated from their dates, friends and partners. Bluemouth member and the mistress of ceremony Sabrina Reeves’ voice booms above the noise. “You’ll have a chance to change partners later on in the snowball section of the marathon. You will get to dance with the people you came with.” Paired with the stranger standing on the numbered feet across from me, we introduce ourselves under flashing coloured lights and begin.

We are now officially entered in the Bluemouth Inc.’s Dance Marathon at the Enwave Theatre. It’s the first week February and the 1930s-inspired activity parallels the current economic state, in a rather uncanny manner. The piece was developed before any economic turmoil began. This piece is designed to be an interactive, participatory event in which audience members compete to out-dance each other in the midst of theatrical elements and preplanned choreography. The clock begins counting down. The “participant count” is displayed at close to 200. We are instructed that we cannot stop moving: our feet must keep moving or we will be eliminated. The referee (Bluemouth member Dan Pettrow) whizzes by on a pair of vintage roller skates, blowing his whistle for emphasis. The first invitation for elimination is made. The planted dancers begin “The Maddison” (a complicated sequence from the movie The Bande a Part) and some audience members attempt to follow along, stumbling through the choreography. The tempo increases gradually and competitors fall away, leaving unassuming Bluemouth member Stephen O’Connell as champion. With this, the flavour of the Dance Marathon is established and this complex, layered, participatory event begins.

Rule #2: You may be eliminated at some point throughout the evening

The investment audience members bring to the competition amazes me. Everyone seems to find equal ground with the strangers next them; such active empathy is rarely found in a conventional dance audience. We are playing the same game; we are competing against each other and the realization that only one pair will win sets in. A sense of urgency takes hold of the group and adrenaline increases. Participants push themselves beyond their comfort zones, which adds to the intensity of the show. Everyone jokes that they will be crowned winner at the end of the three-hour event. We are all a part of the show and each participant has become a protagonist. I know exactly when I will have to give up my #32 pinny and leave the dance floor (during a preplanned “pile-up” half way through a derby in the second half), so my forehead seems to perspire less than those of other competitors.

My focus isn’t winning; it’s the participants’ experience. To intentionally integrate them into the complexity of the show and allow them to fully experience the Dance Marathon‘s potential is my sole purpose. I play a supporting role (along with the other planted dancers and Bluemouth members), assisting the protagonists on their journey in the marathon. We blindfold them, we teach them dance steps, we play with their emotions, break out in spontaneous choreography, whisper monologues into their ears and direct their focus to multimedia screens. We support the event; they live in it. The various dance-challenges we all participate in remind me of a “Survivor”/”So You Think You Can Dance” fusion. Everything is larger than life yet each moment is also extremely personal and intimate. The dedication of the human spirit drives participants into a frenzy during such events as the red-light/green-light derby. Cut-throat criticism is frankly expressed when eliminated competitors are required to judge other couples. Acute attention prevails while Bluemouth characters are humbly isolated in guerrilla-style monologues and genuine shock erupts as couples are eliminated.

Rule #3: You cannot rest until the allotted rest period

Worlds were woven within worlds as the roles between audience members and Bluemouth members became more defined. The rule “knees may not touch the floor” did not apply to the planted dancers as we performed choreography among the dancing couples. There were two allotted “rest periods” in the show during which most audience members moved to the lobby to eat popcorn and re-hydrate. The select few who chose to stay in the theatre experienced a different event than the others. As the participants rested, subtle choreography performed by the planted dancers eventually emerged. Rolling on the floor, and slumping and stretching movements made it difficult to tell if the choreography was planned or not. Some audience members would walk right through the group, completely unaware.

The fact that this tiny section was only seen by a select few each night was not a disappointment to Bluemouth Inc. Each participant experienced the show completely differently. This was intentional, and added a meaningful weight to every image and event. The complexity of this physical theatre structure allowed audience members to invest fully in the experience. Their own intimate interactions occupied their attention and perhaps the dance they shared with their partner was far more meaningful than seeing the rest period dance, or watching a duet danced by Bluemouth members O’Connell and Lucy Simic. On the other hand, the confrontation between Bluemouth members Dan Pettrow and O’Connell forced everyone to stop dead in their tracks. The second rest period included referee Dan yelling a crash warning announcement to blindfolded Stephen O’Connell who improvised to the pulsing music of the Dance Marathon‘s live band. The mass of stimulation made it challenging to focus on the movement, listen to the text or hear the band, and this added to the urgency of the piece.

This layered approach to theatre made Bluemouth Inc.’s work a truly interactive and interdisciplinary event. The most striking example of this approach to theatre in the Dance Marathon was the climax after the final two couples had been announced. Most of the competitors were in the balcony after they had been eliminated and looked down upon Sabrina Reeves delivering a stream-of-consciousness monologue. She sat on the stairs leading to the balcony, while projected images lit the huge disco-ball hanging from the Enwave’s ceiling. The band, led by Bluemouth members Ciara Adams and Richard Windeyer, synced the audience’s heartbeats with their ever-evolving music meditation. Planted dancers performed a choreographed floor sequence. Everything seemed to slow down. The fast-paced competition morphed into a surreal, dream-like installation and I no longer had to play the role of the unassuming character attempting to be innocent about what was happening in the Dance Marathon. I was genuinely invested like everyone else who had taken the journey, experiencing it from yet another perspective, one of the many that Bluemouth Inc. had intentionally presented for us all to explore. 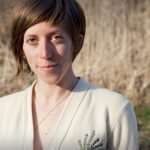 By Cara Spooner
Read more by this author