“… Locating Blackness as a determinable ‘thing,’ as a ‘what’ or ‘who,’ gives us a conceptualization that exhibits the unnerving qualities of a mirage: from a distance, it appears clearly cogent, but up close, Blackness evanesces, revealing no one shared quality that justifies such frequent and assured use of this signifier …

Blackness is simply too many things to be anything but everything.”

From here, things will dangle, like the cord of an unplugged microphone. Consider this an invitation to swing with its rhythm.

If Yellow Towel is an experiment in identity, it is one that imagines identity through the fragmentary, the sensorial, the experiential. In her solo, Dana Michel pursues cyclical processes of defiguring and refiguring: rolling in and out of layers of costume, alighting from one accent to another. In a sense, Michel’s performance of dense multivalence locates something like Wright’s theorizing in situ, within the spacetime of the performing body, the performing stage.

Here, identity is dispersed across accumulated gestures and collected objects: twitches, flicks, sudden changes in corporeal orientation, wigs, a glass jug of milk, a brass instrument, a metal bowl, a table, creamy substances. The subject is impossible to locate. It briefly coalesces amid a temporary constellation, only to (borrowing Wright’s words) evanesce.

Someone once told me about a conversation with a group of teenagers of colour, in which they described performing themselves, cartographically. I no longer recall who told me this story, but they related how these teens discussed rearranging their gestural and verbal scores by neighbourhood: code-switching when crossing north or south of Bloor Street in Toronto.

Many striking dynamics emerge from this anecdote. The hostility of urban spaces, which may demand certain modes of passing in exchange for safe passage, is troublingly present. But there is also remarkable dexterity here: young bodies collectively re-choreographing, finding pathways together, refusing the stabilities and singularities that so many gazes expect.

“The history of blackness is testament to the fact that objects can and do resist. Blackness – the extended movement of a specific upheaval, an ongoing irruption that anarranges every line – is a strain that pressures the assumption of the equivalence of personhood and subjectivity. While subjectivity is defined by the subject’s possession of itself and its objects, it is troubled by a dispossessive force objects exert such that the subject seems to be possessed – infused, deformed – by the object it possesses.”

– Fred Moten, In the Break

A series of minor contortions: craning the torso toward one side before unfurling and twisting the opposite way, to the floor. Jutting one leg abruptly out from under a crouched position; the arm follows suit, awkwardly straining on the same diagonal.

Michel moves with a sort of improbable physicality. Throughout her choreography, limbs and joints take off along contradictory, almost confusing trajectories. She appears constantly to reimagine the potential arrangement of her own dancing body.

“Sometimes my arms bend back.”

I’m lifting a line out of David Lynch’s Twin Peaks. There, the speaker utters this phrase in an eerily distorted voice – an effect created, I’m told, by recording the actor speaking backward, then playing the footage in reverse: “.kcab dneb smra ym semitemoS”

Lynch deploys the technologies of TV production to reshuffle the body, and its voice, for an altered reality. There’s an analogue, here, with the corporeal distortions that Michel executes through choreography, remaking the body for a reality in flux.

Michel’s choreography deftly circulates between bodily articulation and disarticulation. Whether choreographing a group in Lift That Up (2016), or performing alone, as she does in Yellow Towel or her more recently conceived solo Mercurial George (2016), Michel pulls at, twists and warps the body’s composition, capacity, range of motion. To lift language from Moten, Michel’s work, it seems, “anarranges every” limb.

In Yellow Towel, Michel cycles through laborious moments, oscillating efforts and tensions. She attempts to drink milk while lying semi-supine upstage; she later sits quietly at a table sipping Kool-Aid. Engaging the shifting possibilities and impossibilities of movement’s sinewy materiality, Michel enacts all the fraught sensations, the often-obscured absurdities, of being a body.

There are many problems with spectatorship. One of these, specifically in the context of dance in Canada, is the frequency with which conspicuous spectatorship – including what is rendered in criticism, reviewing and other ostensibly authorial practices – is white.

White viewership, my own included, tends to hold all sorts of bullshit assumptions about what it perceives to be non-white performance. (For some related analysis, see Charmian Wells’ “Strong and Wrong: On Ignorance and Modes of White Spectatorship in Dance Criticism” in Movement Research’s Critical Correspondence.) In an interview with Alanna Stuart, Michel explains that, in some respects, Yellow Towel began as a response to such assumptions:

… With Yellow Towel, I was like, “Fuck it.” That’s all the majority of people will see no matter what you do. People will see your minority status in your work. So, you’re forced to do it. So, I [thought] I’m just gonna give myself some breathing room; I’m gonna do the thing that people think I’m doing anyway; I’m gonna see what that feels like to me, what the hell that means to me.

“Can it just be about sharing an experience, can it not be about witnessing, on both sides?”

Throughout his introduction to In the Break, Moten theorizes the radical operations of sound and voice, music and scream. His analysis is rooted in a specific and tangible matrix of theoretical, cultural and historical contexts, yet the implications resonate broadly. Moten draws on Frederick Douglass’s “critical deployment of … music and speech,” identifying “the transference of a radically exterior aurality that disrupts and resists certain formations of identity and interpretation by challenging the reducibility of phonic matter to verbal meaning or conventional musical form.”

In Yellow Towel, Michel frequently carries a microphone. Unplugged, cord dangling. The spectre of amplification, of reverberating sound, dangles with it. A microphone is also present in Mercurial George, yet in that case, it’s live. Live in that it’s plugged in, fulfilling its amplifying function. Wrapped in, dragged through and rubbed across various materials, this technology allows the objects of the work to speak.

In Yellow Towel, the dancing body speaks, reaching out to touch us with its vibration. Michel sputters syllables, twisting words and syntax. And in contrast to the crisp sound the microphone could promise, the enhanced communication that tool could provide, the fuzziness of her speech feels distinctly corporeal. Her muffled elocutions swim in and out of legibility. And in doing so, they interrupt meaning and form much as Moten, via Douglass, describes.

“What can math do for you today?” Michel shouts with elated abandon. A question, a pronouncement, a jolt? Carrying meaning, or going beyond it, this irruption, like the many others that punctuate her speech, reaches out to the audience. Michel’s call invokes not our gaze, but rather our ponderous listening, our potentially messy cohabitation in the space defined and activated by the reach of her sound.

“What is the edge of this event? What am I, the object? What is music? What is manhood? What is the feminine? What is beautiful? What will blackness be?”

— Fred Moten, In the Break

Commenting on a video of herself receiving the Silver Lion in Venice this June, Michel writes “I GOT THE WIG AND THE CREAMY SUBSTANCES OFF IN TIME.”

Indeed, throughout Yellow Towel, the material accumulation of the performance space is reproduced on the dancer’s body: milk, foam and something gooey spill and drip over her skin. And while these may have been wiped away with speed for a post-show quick change, the work’s residues linger in many other ways. Just as identity refuses to cohere in place, just as sound resists being reduced, so too does the performance elude containment. It echoes. It bounces and wiggles out. It might even suffuse our current moment.

At the end of Yellow Towel, Michel turns on a hair dryer before the lights cut out. For a few moments we sit in darkness with only its whirring.

This recalled a memory: since the beginning of summer, I’ve slept with my window open, welcoming the buzzing from my neighbour’s air conditioner into my room. Some nights, it’s been difficult to sleep with this auditory companion.

Let us perform some imaginative rearranging. Replace the air conditioner’s buzz with the hair dryer’s whir. I want to propose that Michel’s hair dryer, the sonic reminder of her performing body’s presence, might be what keeps me awake. It must. Maybe I, maybe we, should never have an easy night’s sleep. 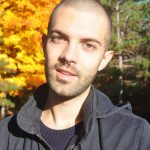