This September, Harbourfront Centre rolled out the 2017/18 season of NextSteps: Canada’s Contemporary Dance Series, which features companies and artists from across the country. The sixth season premiered with The Apology Project, an interarts work produced in association with Toronto’s pounds per square inch performance (lbs/sq”). The performance examines the bitter tensions between oppressor and oppressed, citing shame as the root cause of violence and suggesting embodied action, rather than language, as means to reconciliation.

Artistic Director of lbs/sq” and Dora Award-winning performer Gerry Trentham has led The Apology Project through more than seven years of experimentation and collaboration. With the assistant direction of Diane Roberts, Trentham called upon American mixed-media artist Kaersten Colvin-Woodruff to help him conceive a space for art objects and the performative to coexist. Additionally, Toronto filmmaker Valerie Buhagiar was commissioned to create a set of film projections. “In my work,” Trentham told The Dance Current, “I try not to have one art form in service to another.”

It is clear that Trentham and Colvin-Woodruff exhibit a shared interest in renegotiating how their respective communities’ art is presented. For them, it is a personal approach: Trentham grew up gay in rural Alberta, and Colvin-Woodruff is a woman of mixed Native-American, African-American and European ancestries who was raised in a predominately white neighbourhood of New Jersey. The resulting installation is composed, in part, of a weighty swinging pendulum, a body cast modelled after colonial armour and a feather-adorned chandelier, which serves to challenge the commonly held assumption and projection of what constitutes First Nations imagery.

The evening also challenged notions of plurality as it relates to language. Trentham’s co-performer, Kevin A. Ormsby, shared with The Dance Current that in colonial landscapes “language is problematic and we need to find ways of communicating our alliances.” He gave the example of our bilingual status as problematic, explaining, “In this country, we have to move beyond the apology of French and English and realize it is now a multilingual country.”

Trentham admits he initially conceived the project as a solo performance but made the decision to bring Ormsby, a Toronto-based dancer and choreographer, on board. The decision, he says, was essential for the work’s development and presentation. Experiments with butoh technique helped guide the pair toward an effective embodiment of fear and shame. The acts of hanging and falling came to simultaneously represent the root of an oppressor’s tyranny and an oppressed legacy.

The performance begins with a demand posed robustly to the audience. It goes like this: Let’s play a little game. Pick a colour, any colour, and put it in your mind. Do you have it precisely in your head? Very clear, very precise. Are you ready? Describe it to me. Okay let’s all get that colour in our minds, all together. You know the drill. Great! You have it, you all have it. You realize no one will ever see or know what you see. We will never see all the same colour. Never. No one.

By the work’s close, an earnest shift is apparent. Colonized bodies are less bound by shame and fear, and the notions of apology and forgiveness come to hold no meaning. “In the piece, we transform from more language and words to very little at the end because there’s nothing to really be said; there’s only something to do,” Trentham says. “We also end at the beginning. That last disturbing image is where Kevin and I are starting again, seeing what happens now.” 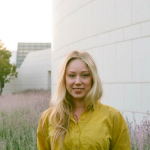 By Vanessa Zeoli
Read more by this author

Tagged: Contemporary, Kevin Ormsby, On the Ground, ON , Toronto