Queer Yukon Society and Klondike Institute of Art & Culture co-produced an in-person creative movement workshop led by Charlie Papps (they/them) on Jan. 15 in Dawson City, Yukon. Papps is rediscovering their relationship with dance and questioning what it means to be a dancer. Their class drew inspiration from the Skinner Releasing Technique, a method that promotes ease of movement using imagery, tactility and alignment of the whole self.

In the lead-up to Papps’ recent class, regional reporter Sadie Segriff spoke to them about the pressure to perform, building trust in the body and the infinite potential of every human form.

Sadie Segriff: How did you come to be a dancer and to teach dance in Dawson City, Yukon?

Charlie Papps: Well, [I did] my BFA at York University in Toronto in dance performance and choreography, and it’s been quite a while, actually, since I’ve danced. Life and growth has kind of brought me away from it, but Dawson is a place of all sorts of opportunity. So I’m nervous and fearful going in just because of my changing relationship with dance. It used to be a coping mechanism. It used to, like, balance me, but now that there’s not much that I have to cope with anymore with the growth and stuff, I have to learn a new relationship with dance. So this thing I’m doing, I don’t know how many people are gonna show up; I have zero clue, but it’s got a lot of Skinner Release in it that I learned from one of my teachers, Julia Sasso.

The things that I’m pulling from [Skinner Releasing Technique] are this ease in the body, finding space between the ribs and the joints and just, yeah, just ease of movement.

SS: So I read that [your class is] for all mobility profiles and that however you move is [acceptable]; it’s just about the sensory and about how you feel. Is that right?

CP: Yes! Yeah, I’m really basing it off of intrinsic movements, like what’s already going on in your body, and how can we draw that out and appreciate it? What patterns are stored in our bodies? What [our bodies do] for us, how [their] patterns hold us and help us feel safe. So within connecting with that, finding a safe place to explore freely through new movements. Just, like, balance for falling and catching yourself in different levels and weight and all that stuff. And then [we’ll tie] it back into the body and do a progressive muscle relaxation. And then have a little journal afterwards.

I want people to walk out of there feeling like dance is accessible to them.

SS: Is this a kind of class that you would do for yourself in terms of healing and feeling your body? How does it affect you, using that sensory feeling and journaling and being able to have no pressure?

CP: Oh, within all the dance classes and everything that I’ve taken, there’s so much pressure to perform. It’s ridiculous! But this one has been very special to me. The Skinner technique – there’s zero pressure. It’s all about being gentle with your body and enjoying and appreciating what ways it can move. One part that I’m going to introduce is the tiniest dance. That’s when you try and stand as still as possible, and you just feel the ways that your body is moving with breathing or making, like, figure eights or just how you’re finding your balance and stuff like that. And so yeah, really on the tiniest level, and then just letting that grow. Building trust in the body too.

SS: It’s so interesting. I went to school [for dance] too, and there’s not enough thanking yourself for what you’re doing – and your body does so much! You’re just pushing and pushing everything. Over the pandemic, personally, I’ve learned to slow down and [I’ve learned] you don’t have to dance 24/7 to be a dancer; you can thank your body for just being there and being itself. I definitely resonate with the whole concept of slowing it down.

CP: Yeah, that’s my most special class. My greatest potential shone through in that class. Pushing my body to perform in certain restricted ways is like coming up against a wall. A lot of the time, I just couldn’t get there, but there’s infinite potential in every body if you just allow it the space.

There’s infinite potential in every body if you just allow it the space.

SS: What do you want people to walk out of your class with?

CP: I want them to walk out of my class feeling like they are a dancer.

SS: Even if they’re not?

CP: Every human is capable. It’s like, what’s the point of dance in our histories? It’s to feel connected and to build energy as a community. Yes, in every single human; it kind of feels silly to restrict who’s a dancer and who’s not because, I don’t know, I haven’t been dancing for a good 10 years.

CP: I guess if I wanted to change how I was gonna say that, [I would say] that I want people to walk out of there feeling like dance is accessible to them. 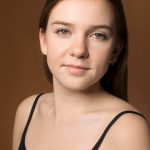 By Sadie Segriff
Read more by this author