I am not a dancer; I’m a writer. This was made abundantly clear to me when I took part in the Maori Movement/Haka Theatre Embodied Sharing class, led by Hawaiki TŪ as part of the Living Ritual: International Indigenous Performing Arts Festival — wearing a skirt. Everyone else had the good sense to either bring a change of clothes or get off the stage. I stubbornly forged ahead — until a particularly deep squat in said skirt (and the resulting tumble onto my back) made me reconsider.

Still, many times during the first day of the Living Ritual Festival, I found myself realizing how little the distinction between “dancer” and “writer” mattered. I heard Seneca choreographer Rosy Simas say she wanted to focus on “creating for our own people” and “[moving] away from educating non-Native people” during her Provocation Address and I was immediately transported back to the Indigenous Writing and Publishing Forum I’d attended at the Banff Centre some months prior. Around twenty other Indigenous writers and I were discussing our desire to do exactly the same thing. We want to stop focusing on educating non-Indigenous people with our work, too, and instead focus our energy on creating art that’s meaningful to our own people. During the day I spent at the Living Ritual Festival, I noticed that the expectations placed on Indigenous artists and their work are, in fact, universal.

Simas had three questions that she posed for the audience:

1. How can we as artists interrupt normative notions that performance by Indigenous artists must merely educate people?

2. What do Indigenous cultures have to teach non-Indigenous artists about art in less polarized, less transactional, more relational ways?

3. How can we break barriers between people of different experiences to diminish cultural voyeurism that can happen when less diverse audiences engage the works of Indigenous choreographers?

There were a number of complex, considered responses, including a particularly interesting one from Bundjalung and Wiradjuri multidisciplinary artist Thomas E.S. Kelly, who said part of his process was tearing down the fourth wall and making the audience part of his work. That way, they couldn’t just sit there, watch and enjoy, then clap and leave to drink wine and eat cheese. When the audiences are a part of a performance, it is no longer just a “pretty dance piece”; when the audience members are participants, they become responsible and accountable for the information they’re given.

While these expectations pose a roadblock, that doesn’t stop Indigenous choreographers from creating what they need to create. During the “State of the Field: International Indigenous performance process and methodologies” panel, Inuk performer Laakkuluk Williamson Bathory from Qaggiavuut! Society for a Nunavut Performing Arts Centre discussed the ways she has to work around colonial infrastructure and lack of space to make her art. In Nunavut, Laakkuluk explained, there are no performance spaces. Instead of theatres, Nunavut dancers perform in the spaces they have available to them, like school gyms. Their vision isn’t diminished simply because Canada refuses to acknowledge and honour their artistic brilliance.

Later that evening, as I was watching Santee Smith from Kaha:wi Dance Theatre perform her solo piece NeoIndigenA, it again struck me that it didn’t matter that I wasn’t a dancer and couldn’t speak at length about Smith’s technique or training. I was a Haudenosaunee woman from Six Nations watching another Haudenosaunee woman from Six Nations perform her art. Seeing her on that stage, speaking her language, interacting with bones of non-human kin, being strong and beautiful and sexy and vulnerable and terrifying like every Indigenous woman I know, was more powerful than I could ever really articulate. The non-Indigenous person I was sitting with called it an “experience,” but for me it was really more of an affirmation — a ceremony. I felt it as a statement of solidarity that we, as Indigenous people, are in this together, and we will create art that will build one another up despite attempts to knock us down. 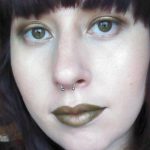 By Alicia Elliott
Read more by this author

Tagged: Contemporary, Indigenous, On the Ground, All