The winner doesn’t always take it all. Not when it comes to The Erik Bruhn Prize.

The prize is attached to a ballet competition for young dancers that returned to the Four Seasons Centre in Toronto on Saturday, March 23. The National Ballet of Canada’s (NBoC) own Siphesihle November claimed the male prize for two dynamic and gravity-defying performances, and American Ballet Theatre’s Catherine Hurlin won the female award with dancing that oozed charm and dazzling technique. Yet the evening felt less like a competition and more like a celebration, an excuse to glimpse what Harrison James, NBoC principal dancer and host for the evening, enthusiastically declared to be “the future of classical ballet.”

The competition was first held in 1988 following the death of Erik Bruhn, a legendary ballet dancer and former artistic director of the NBoC. In his will, Bruhn bequeathed the establishment of a competition to honour two young dancers who, he said, “reflect such technical ability, artistic achievement and dedication as I endeavoured to bring to dance.”

For the thirteenth installment, the NBoC, the Hamburg Ballet, American Ballet Theatre and The Royal Danish Ballet each selected one male and one female dancer between the ages of eighteen and twenty-three to perform a classical pas de deux and a new contemporary work, with the choreographers also competing for a Choreographic Prize. While each company’s dancers performed as couples, they were evaluated as individuals by a judging panel consisting of each company’s artistic director or senior ballet master.

The classical portion of the night began with the American Ballet Theatre dancers performing the crowd-pleasing Don Quixote Act 3 pas de deux. Hurlin captured the playful and feisty energy of Kitri while admirably flying through the challenging thirty-two fouettés, and her partner, Aran Bell, possessed the bravado of Basilio with strong tours en l’air and grand jetés. The National

Ballet of Canada’s November and partner Jeannine Haller next danced the La Sylphide Act 2  pas de deux. While it lacked the utter whimsy and ethereal charm the choreography can deliver, Haller and November both exhibited technical precision: he with high flying assemblés and entrechats, she with delicate bourrées and port de bras.

The Royal Danish Ballet’s Emma Riis-Kofoed and Mattia Santini followed with a delightful rendition of a pas de deux from The Flower Festival in Genzano. While there were some technical glitches, the two evoked the innocence of young lovers with coy glances, gentle arabesques and snappy jetés. The Hamburg Ballet’s Sara Ezzell and Matias Oberlin concluded the classical section by performing a pas de deux from John Neumeier’s The Nutcracker. They struggled at times with shaky lifts, but Oberlin brought a regal quality to the dance that made him a pleasure to watch.

Following a short break, the contemporary portion started with American Ballet Theatre’s Hurlin and Bell performing Let Me Sing Forevermore, a carefree, jazzy number reminiscent of the old Hollywood found in La La Land. Set to a selection of Tony Bennett songs, clever choreography from American Jessica Lang featured effortless overhead lifts and swaying hips, with Hurlin showing off her extreme flexibility with high kicks. Hurlin and Bell brought a flirtatious chemistry to the piece, proving themselves once again to be audience favourites.

Haller and November switched gears with a dark, evocative work titled The Other Side from Canadian choreographer and new NBoC choreographic associate Alysa Pires. The hometown favourites strongly executed choreography consisting of high extensions, interweaving limbs and arms and furious turns, set to Aphex Twin’s version of Heroes. While it showed off the versatility of both dancers, November shone with deep knee bends and fluid movement.

The most experimental piece of the night, Code, choreographed by Nathan Compiano, corps de ballet member of The Royal Danish Ballet, featured Riis-Kofoed and Santini dancing alongside a bright red timer that counted down the ten minutes of the piece. While certainly innovative (a long lapse in music saw Riis-Kofoed and Santini continue to dance in silence as time ticked away), prolonged periods at the beginning and end where the dancers sat stagnant, legs outstretched facing the audience, proved frustrating and failed to show off the strength of the dancers.

The final contemporary work was Kristian Lever’s An intimate distance, choreographed for the Hamburg Ballet dancers. A clever opening featured shifting spotlights with the dancers rapidly repositioning. Angst-filled choreography evoked a tumultuous relationship — furious turns juxtaposed with prolonged pauses, hunched shoulders and staccato movement building tension. It was no surprise to see Lever win the Choreographic Prize for this emotionally charged number that got some of the biggest applause of the competition.

Following the NBoC’s performance of Night, all the competitors were brought onstage alongside the judges, who each greeted their own dancers with huge bouquets of flowers. While November and Hurlin each looked thrilled to claim first prize, everyone onstage seemed content with their takeaway. For the dancers, simply being selected to compete gave them valuable studio time, focused attention and the opportunity to have new works created on them. For the choreographers, it was a chance to present on a world stage and get valuable exposure.

In many ways, The Erik Bruhn Prize does away with the cutthroat atmosphere of competition and becomes more like a showcase for burgeoning young dancers, contemporary choreography and some of the finest pas de deux in the classical repertoire. It’s a special event, and this fact didn’t seem lost on the audience: NBoC dancers, students of the National Ballet School and enthusiastic ballet fans cheered on all the competitors with gusto. Perhaps having the opportunity to see the bright future of ballet gave them the biggest takeaway of the night. 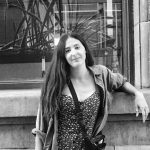