Paul-André Fortier’s latest work Trois closed the autumn season of Agora de la danse (November 22 through 25) and was also performed at the Germain Hotel Montréal’s Fou d’ici supermarket and a cafeteria in Google Montréal. Fortier and performers Mark Medrano and Naishi Wang spoke with The Dance Current about their experience of taking dance hors les murs, outside of the theatre context.

Xdzunúm Trejo How was the experience of performing this piece outside of the theatre?

Naishi Wang We had one performance at Google Montréal, in their cafeteria. It is a different experience. … Everybody sees you not like a serious performer: they see you very close and it creates a kind of intimacy. This intimacy is really personal from both perspectives — from the performer’s and from the observer’s. … You see the moment of the audience’s surprise. Sometimes, they’re just passing by. Some people just take one glance and then they continue what they planned to do, which is shocking. But the challenge is, how do you, not attract people, but how do you interest them?

As performers in a theatre, we are protected from this reality. It is like a third dimension that you don’t know the destination of. But when you enter a shared public space, this wall breaks because there’s no black box. Everybody is so bright — every gesture, every facial expression that you can see — and also it’s the same for you. If you are making any facial expressions, they will know.

Paul-André always talks about the pure abstract — the pure physical aspect. This piece is plainly physical, so there is no emotional part from the performers. In the theatre, you don’t see because there’s a gap between a performer and the audience. You don’t see their facial expression. So, you can be as pure as you can to perform the physical part. When you get into the supermarket or the hotel, people are really close to you. It’s a challenge to only perform the purity of the physical aspect. For sure you’re emotionally connected, but how can you not show this? From my perspective this concentration of the abstract physicality is the core of this piece.

XT Is there a defining aspect or mindset that switches in yourself when performing in a theatre, and outdoors?

MM I had performed a solo of Paul-André’s called 15 X AT NIGHT this past summer, and it was a solo done outside in public spaces. Paul-André has this kind of signature of doing outdoor performances that are also done onstage. So, I think from learning from that experience, of how different it would be to be dancing in a public space, you just have to approach it with a little bit more versatility because you never know what’s going to happen. People are going to walk through the space; there’s going to be animal sounds and traffic and the ambience outside is very active and moving, so how to stay focused in moments like that was really a challenge.

XT What advice would you give to young dancers or those who are pursuing dance in general?

PAF I think it’s just to be adaptable and be open to anything that’s happening because things will always be changing whether you are dancing onstage in a theatre or working with one choreographer to another.

XT What is it about performing dance outdoors that appeals to you? Was it always your intention to take this work out into public spaces?

PAF Well, for me, to present dance in various types of places is always very interesting and intriguing because you hit people who would not necessarily go to see a dance performance. And [they are] either very ordinary people doing their grocery shopping and they’ve never seen a dancer, or if they have, they’ve never seen a dancer from that close. So, it does change their point of view of the art form — in a small way, but it does. And for the dancers it’s a very strong experience because you have to be so focused; you cannot let anything disturb you. And there are so many things happening around you, and you have to keep your concentration, so I think that’s a very good place to learn about focus, about being focused and about doing what you are doing fully. So, it works on various levels for me.

XT Do you feel that the work changes fundamentally from inside a theatre to out into a public space? Taking into account that you are not only exposing dance in a public setting but also reaching audiences who do not experience dance in that way, or who wouldn’t ever have the intention of seeing a performance.

PAF Well, I did this solo 30X30, which I did perform 450 times in fifteen different cities around the world. I’m sure that some of those people are now going to see performances in the theatre. There are the younger spectators also, who are totally thrilled because they have no preconceived ideas on what dance is, so they look at dance in a very generous way, which I find very exciting.

But I think that it’s complementary to stage performance. The public is not the same; the attitude of the public is not the same. When you pay for your ticket and you sit in the dark for an hour, you have some expectations. You want to see something extraordinary; you want to be mystified; you want this and that. When you are dancing outside though, or in a venue where no one pays anything, they don’t have expectations. They just take what is there and it belongs to everyone. So, that’s what I like about it, that they don’t have to be polite and stay. They can just look at you for a minute and continue to do what they were there to do, and that’s fine. And some stop for the whole half-hour, which is also very fine, and there are all sorts of people from various generations, cultures, etc. So, I find that very rich.

XT What does the creation process entail? Do you work in the studio? How do the dancers inform your work?

PAF The dancers are my source of inspiration. I choose and I want to work with them and I think they want to work with me as well (laughs). So, I create all sorts of situations where I can try to find who each of them is and then I build on that. I give them lots of indications, but they create the movement. They are the ones who invent the movement and the sequences and then I put them together and rework them. So, they are really intimately part of the creative process. There is a huge part of each of them in the piece. They are not dancers who are learning any steps from me; I don’t do any steps. I just stimulate them and give them images and some assignments.

I do manipulate them physically, and so we make the dance emerge from their bodies and this is very stimulating because at the beginning of the process, none of us in the studio know exactly where we are going. But they trust me and I trust them, and I know that we are heading somewhere, but I cannot tell before a certain point what the show is going to be about. I know it’s going to be about them and about me and that’s it. That’s how I work.

XT Given that the title is Trois, do you always consider these short dances as trios regardless of the number of people dancing at a given moment?

PAF Well, there are three dancers onstage from the beginning till the end, but there are duets and solos mainly. Let’s say that Mark is doing a solo, Naishi is in the space and Karina Champoux is in the space as well. So it’s always a trio, but there is a point where you watch one dancer and the others are watching him. They become spectators of each other or they decide to ignore each other, which is quite interesting. Of course, when you have a man and a woman dancing together (although, I’m not telling each story to my dancer) I’m sure that the audience does build stories and I find that not being narrative gives the audience a chance to be creative. They invest into the dance what they want the dance to tell them. It makes a very creative audience.

Very often in the piece, there’s a duet and someone is looking somewhere else than looking at his or her partner, which is very rude, in a way. So, for me, it talks about how you behave in partnership with someone. We see more and more people who hook more to their phone, or to their Facebook or their Twitter and things, and they’re sitting at the same table having an intimate dinner and they’re not talking to each other. They are talking to their phone or to their friend while they are eating together. So there are moments like that in my duets mainly — that they are doing something together, but one of the two has gone somewhere else either with their mind or their gaze. I think, for the audience, that would be very obvious. Or you have a duet happening and the dancer looks at it for a while and then looks totally somewhere else. Like it doesn’t interest him or her to look at the duet, so that’s also what I read in the streets in the relationships. And that bugs me. And I decided I would question it and work around that. 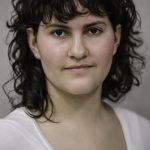