It was never really a discussion in my household: whether I actually wanted to dance. It was always just an expectation, a given. And so I did – I danced from the age of two and a half, and probably before then. I was always around that energy. While many people grow up and leave behind the interests their parents involve them in, my relationship with dance has continued to evolve and strengthen.

My dad would bring me to York University in my 1970s contraption of a stroller and sit me beside him at the piano as he played for the dancers. Today’s dance legends were teaching in the newly formed dance department. That same stroller would bring me down to George Brown College, where my mom taught ballet and the class I most loved to watch: Spanish flamenco. I loved it, admiring the way she played her castanets, demonstrating arm gestures, stamps and steps in her worn character shoes. She was so beautiful when she moved, so graceful, so tiny in her gestures and enormously warm. She would be strict with her students, but in a gently pushy, highly suggestive way, especially in ballet. She gave a correction with a smile, asking her student to lift their leg a little higher than 90 degrees and then lightly lift it way above where they thought it could go. And then she would expect it to be there every time. But in her gentle way. She never raised her voice with her students, nor with me when I was a dancer.

As I grew into her teenage daughter, we had our disagreements, but my love for her always made me come back with a sincere apology. We trained together in those years. Every PD day, every holiday. Every chance we could get, we were in the studio together. She would correct every movement I made, but so gently and with so much love and hope. She just wanted me to have skills and opportunities that she never had.

She started her dance career late in life; her parents didn’t want her to pursue a career in the fine arts. They repeatedly told her it wasn’t viable, but she proved them wrong. She became a ballerina with Les Grands Ballets Canadiens, a ballet mistress for the Canadian Opera Company and, to pay the bills, a cheerleader for the Toronto Argonauts. My parents married in 1967; my dad had proposed three days after they met in Stratford, Ont., after being introduced by Grant Strate.

I hated missing her so much that I needed to dance again. I needed to find myself in the music, in the studio, in my students and in my performance.

I went back into the space that had created me, had moulded the relationship between me and my parents – and it sucked. It. Sucked. In every piece of choreography I produced, I tried to push away the classical technique my mother had spent so many hours trying to ensure was natural in my body. I wanted to get away from ballet technique, from the pretty, perfect lines that I had spent so long refining. It only made me miss her more when I saw the classical technique that I practised with her reflected in the mirror. The studio was where we were close, where she listened to me the most, where I really understood who she was. For the longest time, it was the hardest place to be.

Eventually, I circled back with the birth of my own daughter. She brought me back to ballet and to my love for its perfect lines, that elegance that my mother had been wrapped in from head to toe. And while my daughter grew out of the hobby that I, in turn, had gotten her involved in, she is now growing into a talented visual artist. And I know I need to give her space to explore her own gifts and passions. 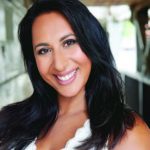 By Alana Simon
Read more by this author