This article was originally published in our Winter 2022 issue.

Featuring images dating back to the early 20th century and new works of art created in 2020, It’s About Time: Dancing Black in Canada 1900-1970 highlights the mostly undocumented history of Black dance and dancers before 1970. The exhibition, curated by Seika Boye and available online, includes themes such as representation and reception, legislation and protest, and performing artists and the stage.

In this specially curated photo essay, Boye has pulled five archival photos illustrating significant moments of resistance and five artistic responses created in 2020, inspired by the archival materials in the exhibition. The responses were commissioned to connect the archival material to the experiences that folks are still living today.

“That connection is important,” says Boye, “that we don’t stay stuck in the archive, that we think about what we can learn about Black life through dance. It’s so much more than learning about dances.”

Seika Boye is a scholar, writer, educator and artist whose practices revolve around dance and movement. She is the director of the Institute for Dance Studies at the Centre for Drama, Theatre and Performance Studies at the University of Toronto, where she is also an assistant professor.

This photo captures a dance on Grange Road in 1956 in Toronto, hosted by University Settlement House, behind what is now called the Art Gallery of Ontario. The Settlement House was a service organization for this part of Toronto, which had a large immigrant population, Black population and lower-income and working class families. The organization hosted interracial youth dances and opened doors to marginalized folks who wouldn’t have been welcome in many places.

“This photo was published with an article in the Globe and Mail that didn’t talk overtly about race at all,” says Boye. “Yet all of the images show an interracial crowd. This would have been significant because this was around the time when the trial for the murder of Emmett Till was happening in the United States. That murder, in many ways, sparked what we now know as the Civil Rights Movement. This certainly would have been a direct but indirect response to that.” Boye also notes that the image is complicated: it’s not representative of what the broader City of Toronto was like for Black folks and other racialized people.

This news clipping demonstrates how Black people were denied entry to certain spaces including dance and concert venues, even when Black artists were onstage; dance classes when dance studios were teaching social dances derives from cultural practices of the African diaspora; and social dance venues for participating in racialized dances like the jive.

“The connection that we can make here is that as legislation changed, it became punishable by law to deny Black people, Jewish people, Indigenous people or any other racialized people from coming into a club,” says Boye. “Once they had to let people in, they could further weed people out by banning certain types of dancing. The jive was a racialized dance form. That’s the tension that we see in this article.”

Ethel Bruneau is a renowned tap dancer and teacher. Throughout her career she also performed as a singer, comedian, acrobat and exotic dancer. That was how you survived as a performer – by doing it all. In this photo, she is performing at Rockhead’s Paradise, a Black-owned club in Montreal and a landmark in the city and in Black culture.

“The fact that it was Black-owned from 1931 to 1977 is very significant,” says Boye. In Montreal, there was a large Black male population; many of them had worked in earlier decades as porters for the railway. “A nightlife emerged from them and for them and through them.” But by the 1970s, much of jazz nightlife had shut down since the Duplessis government came into power in the 1940s. The Rockhead’s Paradise persisted by shifting and changing with the times. There would have been music and dancing, and people would have been deep in conversation, so Bruneau may not have been the focus.

“People would have just been doing what they do, and she’s dancing for everyone and maybe to no one at all,” says Boye. “That was the work.”

Toronto-based Ola Skanks taught herself how to dance by watching movies. “She was really influenced by the dancing that was available to her,” says Boye. She went on to study western styles with Willy Blok Hanson and different African dance forms throughout the 1950s, ’60s and ’70s. When she was an adult, she approached the reserve closest to where she lived temporarily in Regina with her Indigenous husband, with a desire to teach dance. She was told no – by white authorities. Ever committed to teaching young people, she invited the kids from the reserve to attend dance classes in her basement.

“She had a lot of belief in the connection between Black and Indigenous communities,” says Boye. “She talked about it often, with great passion and gratitude.”

“Kathryn Brown is the Black woman in this photo,” says Boye. Brown danced with Toronto Dance Theatre in the 1960s and ’70s, early in the company’s history. She later changed her name, became a filmmaker and moved to Australia. Thinking about dance as resistance brings up questions about what it’s like to be in such a minority within a company or a dance community, explains Boye.

“No matter how well-informed a community is, assuming that they were and maybe they weren’t at all, what’s that experience like?” asks Boye. “This photo speaks to small forms of resistance that are still very relevant today.”

Ashley “Colours” Perez works in street dance forms; Adrianna Contreras is a graphic recorder. This digital drawing and collage is a visual response to four hours of dialogue between Boye and Perez, in which Perez told the story of her dancing life. “This was an exploration of how to bring oral histories into a visual medium,” says Boye.

The map on Perez’s chest was inspired by how much travel she’s had to do to learn from the people she’s wanted to learn from and the challenges of having to move to chase the knowledge and career that she wants. Boye also describes the work as an offering to Perez so she can have a record of her artistic journey.

“I think it’s so important to document people’s dancing lives while they’re still in the midst of them,” says Boye. “Too often we go and talk to people when they’ve stopped dancing, or we try to research them after they’ve passed on.”

Michèle Moss is one of the co-founders of Decidedly Jazz Danceworks. In this image, she is photographed dancing with a costume from her childhood: a direct connection to the Negro Community Centre. In Boye’s exhibition, Moss’s name appears in a 1968 Negro Community Centre dance recital program.

Boye describes this image as a triptych depicting Moss reaching to the right towards her younger self and reaching to left towards her present self. “The history that we’re talking about isn’t ancient,” says Boye. “Here we have this person who was there then and she’s here now. She’s still moving and shaking. She’s on faculty at University of Calgary. She feels like she’s in her prime.”

when the jig is up,

when the act is finished,

when the curtain descends

Standing at eight feet tall, with curtains hand stitched on the canvas, this image paints a picture of a dancer after a performance. “It’s an homage to the complexity of being a Black performer,” says Boye. The dancer is deciding whether to choose the version of herself that the audience wants to see or the version of herself that she wants to present. In the end, she chooses herself.

To create this work, Braxton Garneau looked at images in Boye’s archive and online of Black men dancing. He chose the position in the painting to embody strength and vulnerability. He also wanted to pay homage to the land in Alberta, where he lives.

“When seeing Black dancers outside, we often see a Black dancer in an urban landscape or onstage, and he chose to have this dancer dancing outside, connected to the earth,” says Boye.

Themes like grief and religion in tandem with the government suppressing Black dancing can be found in this poem by Cheryl Foggo.

“We always hear about Black people dancing, Black dancing families, but there is the very real presence of communities not dancing for all sorts of reasons that are related to stereotypes and safety and not wanting young Black girls to be hypersexualized and respectability politics within Black communities,” says Boye. 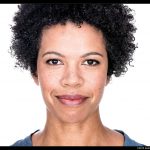 By Seika Boye
Read more by this author