THR3E, a triple bill by Dyade Dances featuring works by Takako Segawa, Linnea Swan and Tedd Robinson, was presented live and in person Dec. 9-11 as part of Series Dance 10, presented by Ottawa Dance Directive. The presentation also featured work by Chelsea Passmore as part of ODD’s FloorPlay, a platform that invites local and emerging dance artists to present an excerpt of a new work before Series Dance 10.

Life is a Paradox by Takako Segawa, interpreted by Yiming Cai and Jolyane Langlois

A metal sculpture of a dress stands in the upstage right corner of the stage, with two piles of white cloth nearby on the floor. Yiming Cai and Jolyane Langlois enter dressed in white robes illuminated by small lights underneath the fabric. One performer offers the white cloth from the floor to the other and dresses the statue with care. Hands and eyes begin to search; spines and backs are activated. The music tingles. This is Ottawa-based Takako Segawa’s subtly intimate and detailed duet that opens THR3E.

At one point, a performer’s hands reach out from the robe at a low level. The other dancer lithely springs to their feet and looks inside the robe and it evolves into a two-person costume. The dancers furl, unfurl, reach, smile. Their gaping mouths are expressive, stretching open silently as if revealing a secret. Their bodies respond to the cloth and each other in a beautiful tangle, the tension of the fabric creating inventive embraces and departures. Cai and Langlois’ focused reach and subtle humour through facial movements contrast with moments of wild and circling limbs in quick displacement as long chords of music make their way through the space. Eyes look up, breath inhales, stillness.

Velvet, sparkly eyelids, white fur and a piano both seen and heard set the scene for Linnea Swan’s short film Pussy Foot, featuring Dyade Dances’ creators Michael Caldwell and Jennifer Dallas. The intriguing push-pull between the two performers in this humorous and strange lament is further enriched by clever literary references, including a shot of Dallas reading Virginia Woolf’s A Room of One’s Own while occupying a small bachelor apartment with Caldwell. This place of mirrored gestures, slow motion and vocalizations is inviting and surprising and, with a few choice words, reveals a dynamic picture of a complex relationship.

Tedd Robinson’s Thirst, also danced by Cai and Langlois, this time in red velvet strapless robes and fitted jackets, is a searching and concentrated work interspersed with sharp and vigorous movements. Sound disperses as a series of soft thuds that transform into dissonant chords. Soft bodies and necks undulate; eyes are laser focused as they sweep the space. Hips test the air from side to side, and hands and mouths are open and breathing. Sticks form a square on the stage floor with a large sea sponge placed downstage centre. The performers are drawn to the sea sponge, and contact with it is deliberate and gentle, like a discovery.

The sound shifts to water, reverberating. Cai and Langlois’ hands and wrists connect across their bodies as they embrace, pull away and reconnect. Their hands graze, eyes seeking, heads nodding. Separately, they explore the space outside the sticks but eventually return to their square. On several occasions, the fingers of one of Cai’s hands move rapidly and precisely, as if emitting signals or sound waves.

Ever-present is the sea sponge. Placed on one performer’s head, then the other’s chest, it draws us into its presence, to their breath, to the stillness. The music buzzes. They join hands and exit the square.

“I was the ocean. He was the star far away, unattainable.” Through movement, text and song, Chelsea Passmore reflects on unsustainable love and what remains in Étoile et Océan. The work migrates across the floor in concert with the dialogue; it curves, transforming into lines as the movement switches between quick and languid qualities.

Overall, Dyade Dances’ return to the stage was a dynamic and curious mix of strong works showcasing diverse expressions of subtle connection and intimacy. 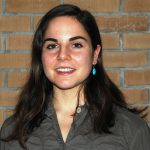 By Elizabeth Emond-Stevenson
Read more by this author