Dancing on the Edge (DOTE) has been a mainstay of the Vancouver dance scene for the past twenty-seven years, presenting outstanding work of professional artists from Vancouver and elsewhere while giving an equal platform to emerging artists. For many, their premiere at DOTE is often in collaboration with established professionals that may lead to return appearances in subsequent years. The opportunity to witness an individual artist’s progression over multiple performances, year over year, is another rewarding quality of this festival.

DOTE welcomed the return of Josh Beamish — dancer, choreographer and founding director of MOVE: the company of Vancouver, which celebrates its tenth anniversary this year. For one evening at the Vancouver Playhouse, Beamish invited dancers who have had a meaningful impact on his career to perform in four of his recent duets.

The program opened with Adoration, a solo performed and choreographed by Beamish himself, which he premiered only days earlier in New York. In performing his own choreography, Beamish shares his artistry intimately with the audience, unfiltered by another dancer’s interpretation. It is nothing short of remarkable to see how far this ambitious twenty-eight-year-old has come, especially for so many of us in the audience who have followed him since the beginnings of his career. The idiosyncratic impulses of his vocabulary that were evident in earlier works — a flexed foot that initiates a ripple through the spine, a determined glance in the opposite direction of movement, a flinch of the elbows echoed by the knees — now strung together to form full, articulate sentences. Sharpness in articulation, however, never precludes fluidity. Such contrasts coexist harmoniously in his choreography, as does complexity and stillness. Quiet pauses are given as much purpose as the most physically demanding movements. It wouldn’t be too early on my part to say that Beamish has already achieved a depth and clarity found in the most accomplished of choreographers. With further opportunities to develop his range, I can only anticipate what will come in the next ten years.

Beamish is best known for his duets, works that capture the intimacy and complexities of the relationships between two people. None have been more poignant than Burrow, a duet that premiered this year at The Place in London, performed on this evening by two dancers from The Royal Ballet – Nicol Edmonds and Matthew Ball. Both men astound with an immense physical and artistic range that imbue the choreography with complex and empathetic characters, elevating this piece to an honest expression of human emotion. That there are few to male duets that I’ve seen that don’t portray a brawl shows there is still much to be expressed in dance about male relationships.

Next up was Pierced, performed by Joshua Reynolds and Jo-Ann Sundermeier of the Royal Winnipeg Ballet, a duet that shows a relationship unraveling. Sundermeier was, as Beamish admitted in his introduction, “the first real ballerina” he choreographed on. The work demonstrates Beamish’s capacity with intricate pointe vocabulary, which Reynolds and Sundermeier executed with charismatic exactitude. Pierced premiered at DOTE in 2012

Stay was performed by Jedidiah Duifhuis and Cristina Graziano. Graziano was the first dancer Beamish choreographed on, as the two studied at the same dance school growing up. In Stay, the dancers submit the weight of their bodies to one another, expressing mutual support and vulnerability.

The final duet, The Other People In Your Party, was a world premiere and a “a love letter to two people who are incredibly special to me,” Beamish shared in a recent interview of the reunion of Heather Dotto and Cai Glover, two founding members of MOVE. After the performance, Dotto said that it had been five years since she and Glover had performed together. It seems old friends are never apart in spirit as the eighteen-minute piece, choreographed in just five days, with minor changes still being made in the hours leading up to the show, revealed not a flinch of hesitation. The dancers’ confidence in one another ignited the stage in this spunky piece that was playful, spontaneous and in a world that only two old friends could share.

In addition to full-length programs, DOTE presented site-specific outdoor works. In the Firehall Arts Centre courtyard, four students of a weeklong workshop taught by renowned Vancouver-based choreographer Wen Wei Wang, performed a fifteen-minute piece called Body Talk. Each of the female dancers demonstrated acute awareness of her personal strengths in a piece that pressed for individuality. Pulsating industrial-electronic music set the backdrop for vignettes of emotional states presented by each dancer. The first came downstage with snake-like movements, joined by a second dancer who added more a punchy and dynamic vocabulary. The chemistry between these four distinct individuals brought forth relationships that responded nimbly to the shifting pairings. Wang taught different styles of contemporary dance in the workshop that seemed to have awakened the personalities of these dancers and unleashed their artistic voice.

Each year, DOTE presents moments of artistic brilliance and brilliance in progress, showing the different facets through which dance shines. 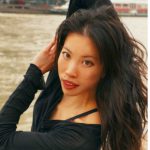