Vancouver’s Dancing on the Edge festival brought another strong collection of work this year. On the whole, the mixed programs were well matched each evening, with the longer pieces generally being more cohesive and developed. The Site Works continue to be good entry points for new audiences (as well as a place to debut new or in-progress choreographies).

Edge 5
Edge 5 oozed out of the gate and ended in a fury of pounding energy. Emmanuelle Lê Phan and Elon Höglund of Montréal’s Tentacle Tribe opened the evening’s program with a piece titled Nobody Likes a Pixelated Squid (a version of which premiered in Stockholm in 2013). The piece begins with both dancers illuminated by a spotlight at centre stage, their liquid movements initiated by scraping noises in the sound score, with popping accents puppeteered by their own vocalizing of a “hee” or a “hoo.”

The duo progresses into partner work, a sort of octopus pas de deux, combining the aesthetics of contact improv with those of street dance. At one point, while Höglund is lying on the ground,  Lê Phan lifts and drops him by pulling at his T-shirt, Höglund bouncing up and down as if underwater. At other points their bodies ripple into and away from one another, like feline cubs playing in a field, but at half-speed.

About three quarters of the way through the music mash up, which Höglund mixed, the speed increases, boosting the momentum of the machinery-like clanging beats. The duo’s inventive vocabulary was at its most exciting here, hitting each note with maximum physicality.

Lê Phan and Höglund are fine-tuning their brand of liquefied hip hop and it is being beautifully perfected as the company matures.

The second half of the evening was filled with the energetic force that is Vancouver’s Shay Kuebler. Feasting on Famine begins with the sound of an aria and Kuebler moving in a large spotlight facing away from the audience. Wearing only a black Speedo and shaving cream, he undulated his naked back, writhing to a female voice. When Kuebler finally turns to face the audience, he reveals a razor in his hand and continues shearing, an act completed with a zeal that was more obsessive than personal care ought to be.

From here the piece picks up its pace, travelling through the preparation, performance and post-workout regimen of a body builder. Kuebler bounces around the stage demonstrating one-handed push-ups, Russian-style split jumps and poses, naming as he goes: “double bicep,” “thinking man,” “victory” and “double victory,” to the delight of the laughing audience.

In the last third of the piece, a cooked chicken and bottle of water were brought onstage for Kuebler to devour – something he accomplished with verve. It will be interesting to see how this part develops when the work officially premieres in 2016 as part of the Firehall’s 2015/2016 season, as it seemed like an add-on just to keep the audience stimulated. Overall, Feasting on Famine was a nice balance of audience-pleasing showmanship and tackling of issues like fanatical body obsession. Kuebler uses his powerful physicality to pass as a body builder and shines with exuberant stage personality.

Steppin’
Steppin’ began with Jeanette Kotowich of Vancouver entering the back deck of the Firehall Arts Centre, where the audience is standing haphazardly or sitting at picnic tables. She mingles to the sound of square dance music recorded by JJ Lavallee as she makes her way to the makeshift stage in the courtyard. After changing from beige moccasins to black square dance shoes, she performs simple jig steps before bowing to the audience, her soon-to-be partner in this square dance.

The music changes (there were five fiddle tunes in total) and the pace picks up; the steps shift from simple toe touches to variations of brush steps, with intricate heel beats around the ankles, sometimes while she twirls in circles. At one point, Kotowich stops and balances on one foot as the other foot follows the fiddle in a sort of wobbling shake. She loses her balance and laughs and the audience claps her on.

Steppin’ was wildly energetic and infectiously fun. Kotowich is of Cree and Métis heritage and blends both her traditional roots and contemporary dance practice throughout: sound designer Wayne Lavallee mixed the Red River Jig, for example – which is like the Métis nation’s national anthem – with electro beats, adding bass to the fiddler’s furious pace while Kotowich repeats a step-together foot pattern in a circle with her hands on her hips, reminiscent of a First Nations round dance.

While a live fiddler and DJ would have added another dynamic layer (I suspect budgetary reasons prohibited this), the show was utterly satisfying and in tune with the vibrant Métis spirit. 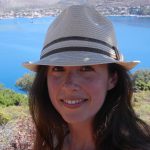 By Lori Henry
Read more by this author