Edmonton may not be renowned for its fashion history, but the evidence presented by Mile Zero Dance’s Anything Goes: GWG Dance in 17 Parts is testament that, indeed, jeans are in the city’s genes (pun wholeheartedly intended).

The piece is part sound installation, part multidisciplinary performance, part massive pile of denim. All of these components are used to expound on the trajectory of the historic Great Western Garment Company (GWG), which after many decades of storied success, finally shut its doors in 2004. Using a literal tonne of jeans (around 500 pairs), sixteen on-site collaborators and a curious mélange of noise-making objects, the show is a three-hour smorgasbord of visual and aural cacophony set on an ersatz factory floor (the converted Sugar Swing Ballroom).

Upon entering the space, guests are admitted with a punched timecard and then guided through a series of stations. A din of conversation, surrounded by bursts of mechanical noises, creates a mixture of organic and inorganic sounds. Textile designer Rachel MacHenry plays the indigo dyer in one corner, wringing out various pieces of deep-blue dipped cloth and then hanging them to dry. Kitty-corner to her, installation performer Kasie Campbell tinkers behind a sewing machine for the duration of the show to construct a pair of jeans. (From reading the program notes, the audience may already know that GWG boasted a 7.5 minute completion rate per pair.)

Seated behind a row of tables — later revealed as sewing desks — a line of performers casually interview patrons on their own denim-wearing habits. As this goes on, dancers Gerry Morita and Lin Snelling occupy the midsection of the room with composer Nico Arnáez. The dancers flit around the open floor, batting flimsy crepe-paper sewing patterns, focused intently on each other beyond the space and time of the slowly filtering-in audience. In some easy, languid moments, they make nod to the casual, democratic movement style of the recently passed choreographer Trisha Brown — a fitting tribute for the factory setting.

As the audience settles in, waiting for some form of conventional “show” to begin, the sounds of a garment factory begin to whirr; Arnáez rips long strips of denim and snips scissors with gusto, looping and creating an aural warehouse. The workers file in — a long and seemingly endless line of carriers, tossing armful after armful of jeans into the centre of the room. The pile soon grows over six feet high, and the workers begin to reorganize; each one takes individual pairs to roll, twist and contort into long paths snaking out from the centre pile, offering up an eventual platform for Morita and Snelling to crawl over. The movements are deliberate but dull, setting a steady, unrelenting pace. The amount of work always seems daunting (moving that many pairs of pants while trying to maintain interest proves cumbersome), yet the performers reliably complete sequence after sequence, moving the mountain numerous times throughout the show. The drudgery, it must be noted, suits the setting perfectly.

The unique quality of denim adds heft to the tasks at hand; the fabric is soft but also heavy and tough. Though everything is more or less blue, the shades vary widely, as do the different cuts and styles. As the pile is spread across the floor in snaking paths, the audience is invited one by one to walk across the maze of fabric, eyes closed, each led by a friendly worker. Sneakily, this allows the audience’s orientation to shift from the round to the proscenium, as we gather on one side, fully exposing a lone white wall.

As the workers crush all the clothing back to the centre of the floor, Morita and Snelling collapse against the wall under mounds of jeans they have been carrying. Arnáez emerges as a sort of foreman, wordlessly instructing each worker to throw a pair of jeans to a different spot on the wall, which has ingeniously been installed with vibration-sensing microphones programmed to emit varying tones based on the location and quality of contact. As such, an aggressively hurled pair results in a bass whirr when it hits the wall, and the brush of a wanton pant-leg produces a softer chime. The speed and intent of the workers casting the pieces against the wall grows to a frantic rhythm — an insane orchestra of melodic drones and denim-smacking beats. This fevered pitch is one of the show’s most satisfying moments: the catharsis is visceral as the workers cast off their burdens with the zeal and furor of an angry lover throwing their ex’s clothing out the window. The resulting cavalcade of denim completely buries Morita and Snelling, but they slowly crawl out as the workers collapse and disappear under the mess.

The first act closes as the workers spread the pile out once again, this time covering the floor evenly with a sea of choppy blue. The audience stumbles about it at intermission, taking selfies and lounging in the cool, heavy fabric.

Intermission features nostalgic screenings of the trite GWG commercials of the company’s heyday. We see a blonde-mulleted Wayne Gretzky sporting acid-washed 1970s and 1980s high-waisted styles and the super-sweet Bum Bums cut that emphasized the rounded bottoms of the “W” in GWG’s logo.

The second act — much shorter than the first — salutes the sewing machine and assembly line by teaming workers with individual threaders and displaying the machines gingerly on piles of denim. Their dance with the devices is the first synchronized movement of the show, the unionizing effect in full tilt. Arnáez emerges as a methodical tapper on a large pressing machine, rolling it around the room and generally beating it with mallets and brushes. The line of workers and machines is set centre stage and the canon of movement builds until Morita dances across the tops of the sewing tables, teetering above the team with a final resilient stretch.

As the factory day ends, the workers file out, joyously bounding in a chorus of “bum bum bum bums,” nodding to the popular GWG style. Like the company itself, the performers allow some silliness to creep in, finishing the show on a cheerful note. After all, what’s more fun than the end of the workday? 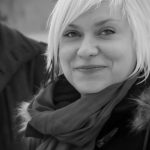 By Fawnda Mithrush
Read more by this author