Various prizes and awards have been granted across Canada this spring to celebrate the accomplishments of dance artists at different stages of their careers.

On May 26, the YWCA Metro Vancouver announced Emily Molnar as the winner in the Arts, Culture & Design category in its thirty-second annual Women of Distinction Awards. Molnar, currently the artistic director of Ballet BC, is a respected Canadian dancer and choreographer. In 2013 she was named “Artist of the Year” in Dance by The Globe and Mail and more recently was appointed sessional artistic director of dance at The Banff Centre, a new position designed to guide and inform all Banff Centre dance initiatives throughout the year in collaboration with the Canadian and international dance community.

On June 2, Dance Victoria announced the winners of its annual Chrystal Dance Prize, open annually to both emerging and mid-career dance artists living in Western Canada. This year two emerging dancers — Sasha Beardmore (Victoria) and Candace Gordon (Richmond, B.C.) — were awarded $1000 and $2500 respectively. Both young dancers are highly trained in classical ballet and will use the award money to continue their pre-professional studies. The CDP also awarded $8500 to independent dance artist Meredith Kalaman (Vancouver) and $15,000 to 605 Collective’s Josh Martin and Lisa Gelley (Vancouver). These awards will support new creations with international artists.

On June 4, the City of Hamilton awarded performance artists Learie McNicolls and Robin “Zee” Zilberg $2500 and $1000 respectively. The City of Hamilton Arts Awards are one of the oldest municipality-led arts awards programs in Canada, recognizing the contributions artists make to Hamilton. McNicolls is an established dancer, choreographer and spoken-word artist and is also the founder of both Myth Productions and the McNicolls Academy for Contemporary Dance Arts. Upon being nominated for the award, McNicolls was asked to invite an emerging artist to be nominated along with him and chose Zilberg. Zilberg is a performer and storyteller who presented her show entitled Borderline Me, which was directed by McNicolls, in 2014 at the Hamilton Fringe Festival.

The city of Montréal recently awarded its second annual Culture Action Award and scholarship of $2500 to artist Pierre Paul Savoie for his project chairs from idea to creation. Two special mentions and a prize of $500 were also awarded to Patsy Van Roost — The Mile End Fairy — for her work A Drawing on the Window, and Circuit-Est Centre Chorégraphique for its project in partnership with Louise Bédard Danse entitled so we create?.

On June 18, Montréal choreographer Marie Chouinard was presented with the insignia of Knight of the Ordre national du Québec. Founded in 1984, the Order is the highest honour awarded by the Quebec government. Highlighting excellence and merit, it recognizes individuals who have made a significant contribution to the development and vigour of Québec society. “I love dancers, I love to see dancers dance, so I create choreographies that will magnify them,” comments Marie Chouinard, in the company’s press release. This award of distinction is the most recent tribute that Chouinard has earned over the years, including the Prix culturel Samuel de Champlain (France, 2014), the award from Conseil des arts et des lettres du Québec for best choreographic work, for THE GOLDEN MEAN (LIVE) (2012), the prix Denise-Pelletier (Quebec, 2010), the rank of Chevalier in the Ordre des Arts et des Lettres (France, 2009), the rank of Officer of the Order of Canada (2007), the Grand Prix du Conseil des arts de Montréal (2006) and the Bessie Award (New York, 2000). ~ 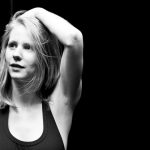 By Heather Stewart
Read more by this author