Last week, during the final stretch of one of Toronto’s largest annual festivals, I saw some brilliant things. And not just one brilliant thing, but several. Consequently, I’ve come to the conclusion that the creative leadership of Luminato, led by Jorn Weisbrodt — whom the Toronto Star recently dubbed “visionary-in-chief” — may be my new personal saviour. If a shrine in his name should appear anywhere in the Greater Toronto Area, it may or may not be safe to assume that I had something to do with it.

Sometimes you see art that makes you feel like you’ve never seen art before.

Once inside the doors of the main gallery at the Museum of Contemporary Canadian Art, I stood aghast in front of what can only be described as a life-size pop-up picture book of utterly extravagant art director wet dreams. There were nautical trappings and dancers in metallic sea urchin headdresses. There was an indoor, chest-high field of wheat and a constellation of suspended and motorized/rotating taxidermied birds. And amongst it all, time passed both incrementally and in the blink of an eye, as the work’s large cast (the size of a small village) took on a strangely inanimate quality — like figments of action, or performative holograms. It’s a uniquely unusual experience to sit in a bleacher facing a work of performance that somehow doesn’t take its liveness so seriously, as if its four-dimensionality was almost incidental, simply how the thing came to be.

Over the course of three hours (not including the fourteen-hour pre-show, which consisted of processions and shows at different secret locations in the city), the cast of nearly two dozen actors, dancers and musicians do a lot. They wander, spit, kiss, shot-gun, twerk, urinate, lash themselves, haze each other, bathe in honey, play double-dutch, inflate and deflate balloons, singe each other’s pubic hair, conduct above-ground burials, mime fellatio and sing Weimar cabaret songs. Hiccups of choreography, with a brief cameo/homage to Swan Lake’s “Danse des petits cygnes,” even make the cut. And when he isn’t in the middle of the action, creator Derrick Ryan Claude Mitchell stands in the back corner behind a music stand, embodying a sort of autoerotic Oz where occasional crotch grabs are the only thing that keeps him from peeking through the curtain of his very own Emerald City.

All of this to say that the experience of seeing this work is incredibly challenging. It does the audience no favours, but asks for many in return. And even though many critics and audiences alike will maintain that the work lacks a modicum of accountability to traditional performance expectations, I maintain that the work is carnal art-making at its most decadent. As if the angst of painter Francis Bacon met filmmaker Ryan Trecartin’s frenzied-everything on Robert Wilson’s stage. Like if someone produced every single entry in one of those dream dictionaries. It felt like the place where chaos goes to find harmony.

And then there was Pina.

It feels like sacrilege to write anything about Pina, even if it only obliquely resembles a review, because to do so seems to suggest that Pina is up for discussion. But she isn’t. There is no discussion. And that is because her work is perfect. She was an empress of theatrical vision, compositional acumen and wry wit, flawlessly weaving sweeping choreography with idiosyncratic gesture, audacious stillness with pensive movement, wailing cries of both ecstasy and despair. And in Kontakthof, all of the above coalesce to be always, always heart-wrenchingly and riotously funny.

Picture a gymnasium filled with a throng of young women and men dressed in their best. Then picture them divided by sex and staring each other down as if to silently vote which group gets to play prey, and which group gets to feast. In her opus to the primal discordance of the sexes, Kontakthof is a work that meditates on appeal, attraction and abuse through the apex of postured vanity and vain posturing. It is a tumultuous and painstaking mating dance that comes across as more of a violent tango. The work is brilliant, and its maker, even more so.

If Louise’s body was a building, it would be one of Frank Gehry’s impossible structures; swooping and supporting itself in sinewy and gravitationally irreverent ways.

Or maybe she’s a sculptor. Her medium? Air. She weaves, and cuts, and compresses it, and through the most rapid succession of motions inevitably conducts a current of her own. Perhaps fittingly, So Blue’s choreographic score appears like a never-ending series of exercises intended to exhaust, and yet for Louise, they only prompt the slightest and somehow adorable perspiration.

Motivating this fury of movement is an assortment of techno/electronica that spans most of the work’s entirety, fostering a somewhat tribal timbre that tends to dwarf anything that isn’t a beat. But when the music fades for the first time, Louise’s full force comes into sharp focus. In one of the most memorable moments, a simple, nimble and excruciatingly prolonged handstand reveals the flesh of her upside-down torso, lit to look blue and appearing almost grey. Minute after minute, the viewers zoom in on a body the colour of dead matter appearing to give oxygen a second chance. Immortal is the word for it, but no matter the colour, So Blue dissects the anatomy of force, and Lecavalier wields the scalpel. 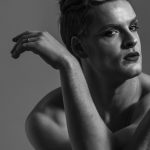 Tagged: Contemporary, Festival, On the Ground, ON , Toronto