Ballet BC’s longtime rehearsal director, Sylvain Senez, announced his retirement at the company’s Program 3 in Vancouver May 13. In a phone interview with The Dance Current, Vancouver-based Senez reflects on his twenty-five years with the company, how dance has changed, and what he’s got planned next.

Brittany Duggan: I was in the audience when Ballet BC Artistic Director Emily Molnar announced your retirement. What prompted your decision?

Sylvain Senez: Since I’ve been with Ballet BC for twenty-five years, and rehearsal director for seventeen, I’ve seen many different periods that the company has gone through. Prior to that, I was dancing with Les Grands Ballets Canadiens [de Montréal]. I’ve been with ballet companies since I was seventeen years old, and I just need a change — to pursue different things and explore different creative avenues for myself. The company is doing amazingly at the moment. The dancers and choreographers are an amazing group. My wife, Alexis [Fletcher], is still dancing with the company and has been dancing for many years.

BD: For our readers, can you tell us a bit about what a rehearsal director does?

SS: A rehearsal director is very different in every company. In Ballet BC, the rehearsal director sets ballets, coaches the dancers, teaches class, does the scheduling and basically acts as Emily’s right hand. I do anything from taking care of studios, to washing the floor if needed, acting as a liaison between choreographers, dancers, etc. Basically I am the run-around guy, tying everything together! It’s a combination of being involved on the artistic side, administrative side, and on the dancers’ side. The rehearsal director is like the glue that holds everything together.

BD: What’s the most challenging part?

SS: Most challenging is the multifaceted aspects of the job, and always wearing different hats. At the same time, having to teach class, be in rehearsal for six hours a day and manage the schedules. The company is always juggling about twelve pieces per year.

BD: And the most rewarding part? 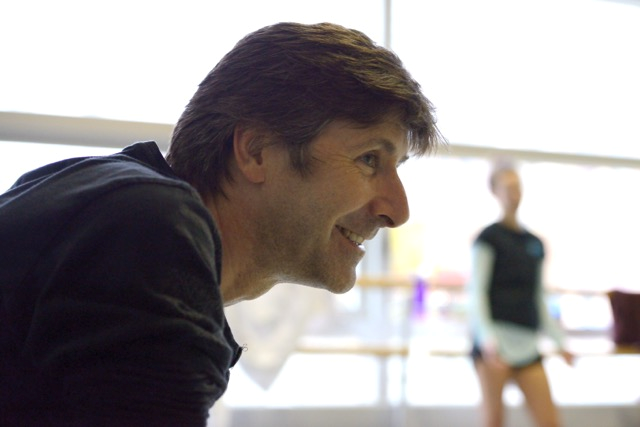 SS: [Laughs]. It sounds cliché, but the moment when the curtain goes down and the dancers are there, after this beautiful show. Dance is not just entertainment — it’s a very transformative, as much for the dancers as for the audience. It’s something that can change you. When the curtain comes down, all that work pays off because the people who are there have been moved and touched and altered in some way. It affects them and makes them see art and life differently, and when that happens it’s just magical and never ceases to amaze me.

BD: Who will be taking over your position?

SS: I’m looking forward to the new rehearsal director starting. He’s very qualified and has worked with the company before — his name is Christophe Dozzi. He came as an assistant to a choreographer to set a piece so he’s had experience with the dancers.

BD: Looking back, what have been the best times with Ballet BC?

SS: The best times have always been in the studio, with the dancers, creating in a nurturing environment.

BD: And most challenging?

SS: One of the most challenging times was when the company went into insolvency [in 2008]. My wife was in the company at the time and I was dancing elsewhere. That was hard; the company almost closed its doors. It didn’t, but it was very hard on the dancers to be faced with no work. This is a chapter that we have to acknowledge that happened with Ballet BC, but the fact is that it didn’t go into bankruptcy. Not only came back, but it is stronger than it’s ever been now. It’s absolutely sustainable in its new format.

BD: How do you think dance has changed  — aesthetically or physically — since the beginning of your career?

SS: Because we’re ballet trained, there’s definitely a rigorousness in training and the classical ballet vocabulary, that remains the same. The syllabus is there for training, but each choreographer has their own way of creating and developing work, and discussing subject matter. These days dancers are tasking a lot more, whether it’s improvisation-based, researching movement, or altering/generating movement from an emotional place. The whole body has a way of expressing that is infinite, and we are now just tapping into ways of moving and resources that we had not tapped into in previous years. We are using concepts now that we didn’t talk about thirty years ago, especially not in ballet companies.

BD: Twenty-five years is a long haul. How does it feel to leave?

SS:  I’m leaving the company that’s been my family, the company that’s close to my heart. I’ve had half my life with Ballet BC. But sometimes it feels like my first day in the studio with them was only yesterday. The company has changed, but slowly. Dance companies never change all at once, but morph gradually as people come and go.

It’s hard to believe it’s been twenty-five years. It has been seven years since Emily joined and she changed things, especially bringing the company out of the situation it was in. But I think, as Ballet BC is being propelled forward into a great future, it feels good to know I had something to do with it, and I had my part in that. Everyone knows that being rehearsal director is a bit of a thankless task, with a lot of responsibility. But I’m proud of the work that I’ve done, and how I’ve helped get the company to where it is today.

BD: What will you be pursuing next?

SS: I’ve always been interested in lots of different things, but Ballet BC was pretty much a 24-7 job. My wife and I have a B&B at home, so we will be concentrating on running that. Also, I will be focusing on my photography and videography as well. Of course, I’ll be teaching, probably travelling, assisting choreographers to set pieces on different companies. So there’s a variety of things on the horizon for me.

Senez is collaborating with his wife, Fletcher, who will be presenting her solo piece Altar’d at Dancing on the Edge July 12 and 14 and in Nanaimo at the Infringing Festival on July 9. The couple are also producing and curating a performance series called Casa Om Presents… and will be presenting The Dance Deck Deux program and The Dance Deck Trois program, two outdoor performances with invited guest artists that takes place in the backyard of their house, later this summer.

By Brittany Duggan
Read more by this author